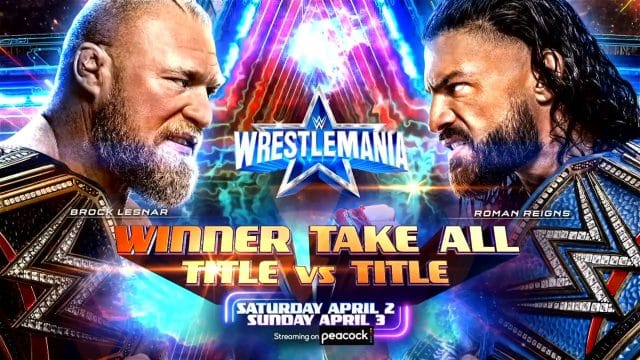 The biggest event in the history of sports entertainment, the most exciting annual event of WWE, WrestleMania 38, is around the corner. All the major WWE superstars will take part in high-flying battles and exciting drama.

Every major title will be on the line, with the cards taking place over the course of two nights. WWE fans all across the globe are excited to witness the biggest WrestleMania match of all time; the battle between Brock Lesnar and Roman Reigns for the winner takes all of the WWE Championship and the Universal Championship.

Here you will learn about WrestleMania 38, its match card, how to watch on TV and live stream, preview, and prediction.

When and Where is WrestleMania 2022?

WWE WrestleMania 2022 will entertain the audience with some beastly fights, promising to be breath-taking and highly dramatic. The main card will be the battle between the WWE Champion Brock Lesnar and the Universe Champion Roman Reigns.

The cards also include some exciting battles in the form of the return of legendary WWE Champion ‘Stone Cold’ Steve Austin. The fight between the celebs Johnny Knoxville and Sami Zayn promises to be exciting as the battle between Edge and AJ Styles. WrestleMania 38 will reveal the surprise opponent against Seth Rollins, which surely will push the audience to the peak of excitement.

Let’s have a quick look at the Preview and Prediction of the major events.

Roman Reigns will face Brock Lesnar in a match that is called the biggest WrestleMania match of all time. In this battle between the two Champions, the winner will get a chance to unify both the titles, which is the main attraction of this year’s WrestleMania.

Brock Lesnar, the current WWE Champion, has had a long feud ongoing with the Universe Champion Roman Reigns. The former lost his title in a championship match against Bobby Lashley when Roman Reigns interfered in that match.

The WWE champion won his title back in the Elimination Chamber and, at the same time, won the Royal Rumble to challenge Roman Reigns for the title in the main event of WrestleMania 38.

The Surprise Sports’ WWE experts predict that Brock Lesnar should win the battle and unify the titles after a hard-fought night. This is because the momentum of Roman Reigns as an unbeatable champion has been stalled for a long. The Universe Champion can get his momentum back only after losing his title to the WWE Champion and win it back on the journey ahead.

Becky Lynch, the current Raw women’s champion, defeated Bianca for the title in seconds in her return to the Summer Slam event. After winning the Elimination Chamber match, Bianca Belair has a go-to feature in WrestleMania and reclaims her title.

The Surprise Sports’ WWE experts predict that Bianca Belair should reclaim her championship title. It’s the only way WWE may provide justice for her previous defeat in seconds.

Rousey has won the Royal Rumble to challenge Charlotte Flair, the SmackDown women’s champion, for the title in a WrestleMania event. It will be a mouth-watering clash as the intensity of the game seems to fit the biggest stage.

The Flair-Rousey feud has been a flop in SmackDown. It can only pick up pace should Ronda Rousey win the title.

SmackDown Tag Team Championship – The Usos vs. Boogs and Nakamura

The Surprise Sports’ WWE experts predict that Boogs and Nakamura are more of a comedy duo to end the run of the record-setting Uso brothers. The Usos should defend their tag team title.

Edge has returned to the WWE, throwing a challenge to face anyone in a WrestleMania event. AJ Styles answered him in style before receiving a vicious beating. This feud will take shape after the match on the biggest stage.

The edge should win the match, as it would be foolish for WWE to end Edge’s run so quickly.

RK-Bro should continue their domination by successfully defending the title.

The legendary WWE champion ‘Stone Cold’ Steve Austin appeared on the KO show hosted by Kevin Owens. The host promised the world the most exciting KO show on the stage of WrestleMania, demanding Austin to bring in a fight. The WWE audience will wait eagerly to see the legend take on a fight on the biggest stage.

When Seth Rollins asked for a match at WrestleMania, McMohan promised him a match with an unnamed opponent. The surprise opponent seems to be Cody Rhodes which we have to find out on the biggest stage.

Cody Rhodes should return with a win over Rollins.

How to Watch WWE WrestleMania 38 on TV and Live Stream

WWE Network will broadcast WrestleMania 38 in all the regions. You need to purchase a monthly subscription for 9.99 USD to watch this event live on WWE Network. If you live in the United States, you can enjoy the high-flying actions of WrestleMania streaming with Peacock. Again, you need to buy a monthly subscription for only 4.99 USD to watch it live.

You can watch the electrifying and colossal battles of the main cards on your TV Network. Let’s take a quick peek at the TV channels where you can enjoy this event.