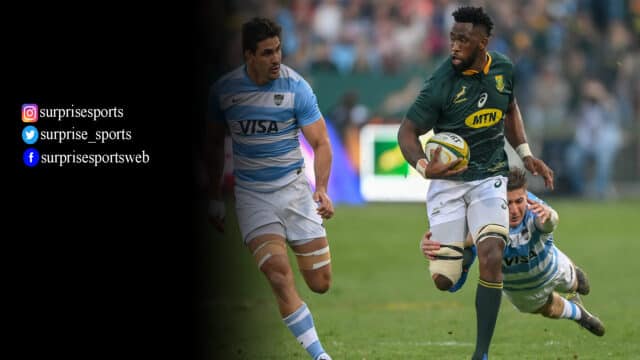 We are down to the 5th Round of The Rugby Championship 2022 as the Argentina Pumas play host to South Africa Springboks on Saturday. Here we have Argentina vs South Africa Rugby, start time, lineup, prediction, and where to watch live.

This year’s Rugby Championship is going down to the wires. All four teams still have the chance to win the title.

Both Argentina and South Africa have won two and lost two games so far. The All Blacks clinched a controversial and dramatic last gasp win by 37-39 points over the Wallabies last Thursday. They are now leading the table with 14 points. Both Los Pumas and Springboks are on 9 points, having played a game less.

Los Pumas are coming off a thumping defeat by 53-3 points against the All Blacks. However, they won their first-ever Test in New Zealand against them a week earlier of that defeat.

On the other hand, the World Champions South Africa Springboks cruised past Australia by 8-24 points in Round 4. However, they lost against the Wallabies a week earlier that victory.

Los Pumas are coming off a 53-3 massive defeat against the All Blacks. They need to put things together at home tonight against the Springboks.

On the other hand, South Africa will be more confident following their 8-24 dominating victory over the Wallabies in Australia.

In such a crucial stage of the championship, it’s sure to be an intriguing matchup. The World Champions Springboks will go on all cylinders to claim a victory before hosting Argentina in Sept. We predict South Africa will win by 7 points.

The match will be available on ESPN and TV Publica in Argentina. SuperSport will broadcast the Rugby Championship match live in South Africa.

Where to watch the Rugby Championship 2022 from anywhere: