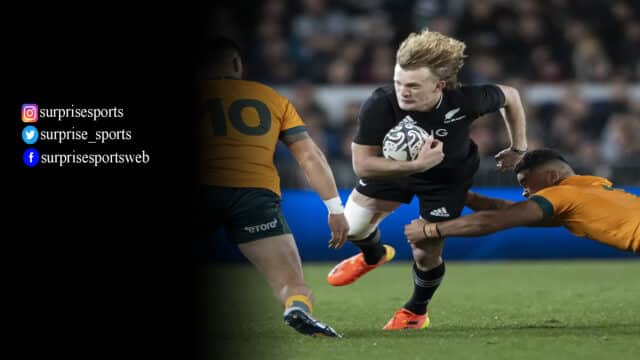 We are down to the 5th Round of The Rugby Championship 2022 as Australia plays host to their old rivals New Zealand on Thursday. Along with the Rugby Championship, the Bledisloe Cup will be on the line as the two old rivals meet at Marvel Stadium, Melbourne. Here we have Australia vs New Zealand Rugby, start time, lineup, head-to-head, prediction, and where to watch live.

This year’s Rugby Championship is going to be the most exciting in a long time, as all four teams can lift the title. All four teams have won two and lost two of their four games.

Only a point separates the teams with the New Zealand All Blacks a point ahead of the three. They are leading the competition (10 points) with the help of a bonus point in a defeat.

The defending champions New Zealand are coming off a thumping win by 53-3 points over Argentina Los Pumas. Before that, Ian Foster’s men lost to the same opponent by 18-25.

Elsewhere, the Australia Wallabies are coming off an 8-24 defeat against the World Champions South Africa Springboks. However, they beat the Springboks by 25-17 a week before their defeat.

This is the most played rivalry in the history of the sport. The All Blacks largely dominate the tie with 108 wins against the Wallabies’ 37.

TRC RD#5: Wallabies v All Blacks
The teams for the Bledisloe Cup clash at Marvel Stadium in Melbourne have been announced; with fly-half Bernard Foley recalled into Wallaby team…#AUSvNZL
Team News: https://t.co/013BiyB4uF pic.twitter.com/Xn05Fu7OOz

The defending champions New Zealand are coming off a thumping victory over Los Pumas by 53-3 points. It will give them a lot of momentum before facing off their oldest foes the Wallabies.

On the other hand, Australia will get the home advantage at the Marvel Stadium. However, they need to come back in winning ways. The Wallabies lost to South Africa by 8-24 last round.

The All Blacks have dominated their opponent in recent meetings, and we predict they will win this tie.

The match will be available on the free-to-air Nine Network in Australia. Moreover, fans can enjoy the live stream via Stan Sport. Sky Network will broadcast the Rugby Championship match live in New Zealand.

Where to watch the Rugby Championship 2022 from anywhere: