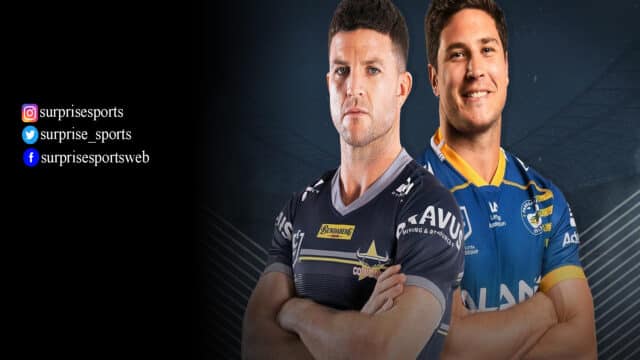 The Cowboys host the Eels in a crucial game tonight as a spot in the Grand Final will be on the line. Here we have North Queensland Cowboys vs Parramatta Eels live stream, start time, preview, h2h, prediction, and how to watch on TV.

North Queensland Cowboys have been the author of a magnificent story this season. They finished the last term at 15th on the ladder. Now, they’ve found themselves one win away from the Grand Final.

The Cowboys finished the regular season 3rd on the ladder. They conjured an incredible comeback against the Sharks in the finals. They trailed by 8 points with seven minutes remaining and leveled the game with 15 seconds on the clock. Valentine Holmes’ field goal secured a spot in the preliminary l finals for the Cowboys.

Elsewhere, the Eels have been coming out on top in big games. Finishing the regular season 4th, they began the finals with a 27-8 defeat to the Panthers.

However,  they bounced back in the make-or-break match against the Raiders with a thumping victory by 40-4. Mitch Moses showed no signs of stopping just yet,  scoring a try, kicking six goals, and creating a couple of line break assists.

Parramatta Eels will look to reach their first Grand Final after 2009, when they lost to the Storm.

The Cowboys got a thrashing victory by 4-35 points in April, the last time they went head-to-head with the Eels. However, the Eels are 2-1 up against the Cowboys in their previous three meetings.

It would be a toe-to-toe battle between the Cowboys and Eels with a spot in the Grand Final within touching distance. Both teams will go on all cylinders.

The Eels have been exploding in big games when it matters the most. We predict they will do the same tonight. They are fresh off a thumping 40-4 win over the Raiders.

Mitch Moses scored a try, kicked six goals, and created a couple of line break assists. He leads the league with 23 try-ends, three more than the Cowboys’ Chad Townsend. Hence, an interesting battle is brewing up there as well.

The Cowboys would feel the pressure of being the home favorites. They have been a bit shaky lately. They finished the regular season with a 20-10 defeat to the Rabbitohs before winning against a second-string Panthers’ side. Moreover, they leveled the match against the Sharks in the finals with 15 seconds remaining.

We predict the Eels will come out on top to reach the Grand Final.

How Can I Watch North Queensland Cowboys vs. Parramatta Eels on TV and Live stream?

You can watch the NRL preliminary final between North Queensland Cowboys vs Parramatta Eels on TV via Channel 9 in Australia. For the cable-cutters, the live stream will be available on 9Now.

Fans from overseas can watch the live stream via Watch NRL.