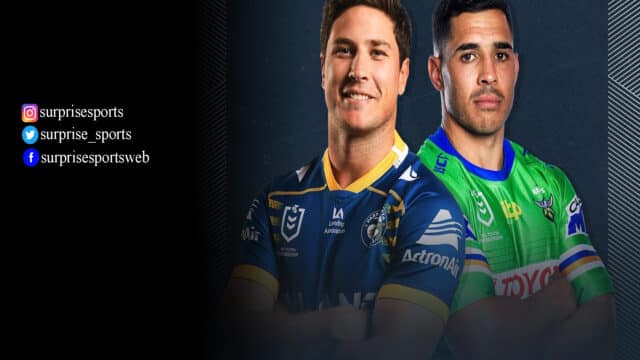 Parramatta Eels vs Canberra Raiders will be at CommBank Stadium as the semi-finals in NRL kick off on Friday. Here we have the finals series start time, preview, h2h, prediction, and how to watch on Eels vs Raiders Live Stream.

The semi-final between the Eels and Raiders will take place on Friday, 16 Sept. at 7:50 pm AEST. Parramatta Eels will host the game at CommBank Stadium.

Parramatta Eels suffered a hard-fought defeat against the league leaders Penrith Panthers in the qualifying finals. After finishing 4th on the ladder, they squared off against the Panthers for a 27-8 defeat.

However, they will feel much more confident against the Raiders, who finished 8th in the regular season.

Canberra Raiders put up a magnificent display to see off the 5th-place holders Melbourne Storm. They defeat the Storm by 20-28 points to reach the semi-finals.

The North Queensland Cowboys await the winner of this tie in the preliminary finals.

Parramatta Eels are 4-1 up against the Raiders in their previous five head-to-head meetings. Moreover, they won the most recent tie in May by 20-28 points.

The Eels have won six of their last eight games at home. They have won a game following a defeat in the last eleven times.

The Raiders did an excellent job in the qualifying finals. They beat the Melbourne Storm by 20-28 points. It will give them a lot of momentum in their crucial semi-final clash.

However, things won’t get easier against the Eels on Friday. Canberra lost four of their last five meetings against the Eels. Moreover, the Eels have a 6-2 home record in the previous eight.

Though Eels lost to the league leaders Panthers by 27-8 points, it was a close game. The Eels fought well for the first 55 minutes until Mitch Moises was forced off.

Mitch Moises’s return could be key for this game. Moises has declared himself as a certain starter. We are going with the Eels to reach one step closer to the Grand Final.

How Can I Live stream the Eels vs Raiders NRL Match?

You can watch the NRL qualifying final between the Eels and Raiders on TV via Channel 9 in Australia. For the cable-cutters, the live stream will be available on 9Now.

Fans from overseas can watch the live stream via Watch NRL.