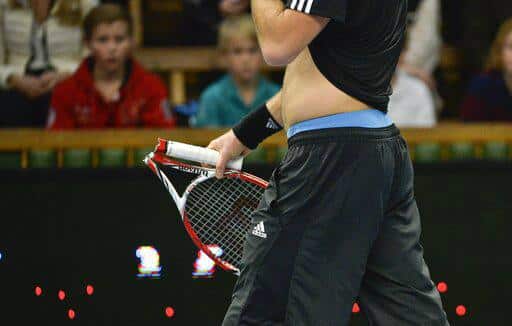 Tennis is one of the most highly competitive sports in the world, as some of the fittest athletes around conduct a genuine battle of physical and mental strength – where winning and losing can come down to a difference of mere millimeters. That’s why it’s such a popular watch for millions of spectators, with the matches being viewed by many on TV as well as in person, such as all those making up the packed crowds at the world’s five best venues.

With so much at stake, though, it also means that every so often the intense pressure of the sport can all get a bit too much. This has resulted in many memorable meltdowns, where even some of the greatest tennis players have got a little bit too hot under the collar and shown serious cracks in the composure that many of them normally try to employ on court.

Let’s step back in time then and take a trip down memory lane to revisit our picks for the top tantrums in tennis.

Serena Williams has absolutely cemented herself as one of the greatest tennis players of all time, having won an immense 23 Grand Slam singles titles. Despite many now considering her career over, it seems that the 41-year-old is still unsure whether or not she is finished with the sport, with her recently saying that she has not retired from tennis. The American normally displays such tenacity on the court, powering through many an opponent. Nevertheless, with her being such a win-at-all-costs personality, on the rare occasion when things don’t go Williams’ way, there can be fireworks.

The most extreme display of this came in the 2009 U.S. Open semifinals, where she faced off against Belgian Kim Clijsters. Perhaps feeling the tension even more due to being in front of her home crowd, Williams found herself performing a foot-fault when she was serving to stay in the match – gifting Clijsters two match points. What followed was an infamous diatribe, in which Williams offered to rather violently feed the ball to the lineswoman who made the call.

Infamous for his dynamite temper, American John McEnroe was a player who seemed to take just about as much pride in his outlandish on-court behaviour as he did in his ability to produce some of the finest volleys ever seen. As such, it will be of no surprise then to learn that we could have filled this article solely with his tantrums. However, the one that we have decided on happened during his first-round match against countryman Tom Gullikson at the 1981 Wimbledon Championships.

After one of his shots was called out, McEnroe strongly disagreed with the decision. As there was no Hawkeye yet to clear up these kinds of incidents, he became more and more enraged, leading him to scream one of the most famous quotes in sporting history. “You cannot be serious!” became so entwined with the player that it was the title of his 2002 autobiography. It wasn’t just his verbal outbursts that made this match so unforgettable, as he also smashed his racket into the hallowed turf of Centre Court.

Nick Kyrgios is without a doubt the most polarizing force currently playing in tennis. The 27-year-old has become notorious for his antagonizing antics, with viewers seeming to either find his constant barrages deeply entertaining or instead see them as bringing shame to the sport. Whichever side of the argument you fall on, you have to admit that you can’t have an article about top tennis tantrums and not have the Australian featured front and center. The one we have gone for is his epic explosion at the 2019 Rome Masters, when he was facing Norwegian Casper Ruud in the second round.

With the match tied 1-1 in the deciding set, Kyrgios was given a game penalty for swearing at a line judge. Of course, the mercurial player didn’t take it well and swiftly became a hurricane of destruction – slamming down his racket, booting away a water bottle, and then chucking a chair onto the court.

Despite frequently showcasing this type of behavior, Kyrgios does seem like he could win a major tournament soon. That’s why he’s a popular choice for bettors who seek out the best betting websites for tennis, which can be found over at SBO.net. The betting sites can be used for tennis or a whole raft of other sports. All the listed online bookmakers have been carefully selected for their safety, their abundance of bonus offers, and for their easy to follow guidelines, meaning bettors can just concentrate on selecting their bets.