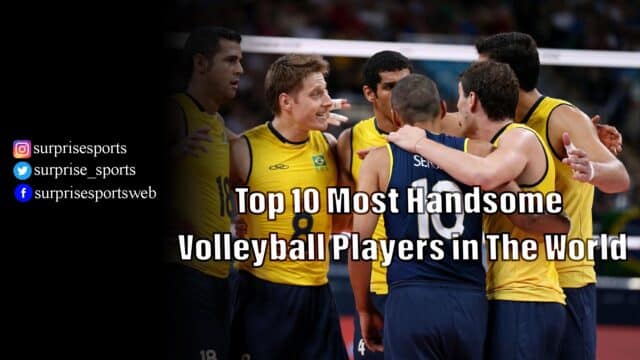 Top 10 Handsome Volleyball Players in The World in 2022

Here are the most handsome volleyball players suggested by millions of fans.

One of the most attractive volley players, Facundo Conte, is an Argentine volleyball player who has won bronze at the Olympic Games, gold at the 2015 Pan American Games, and silver in the 2011 South American Championship.

\He is a member of Altron CMC, a Polish club. Polish Champion (2014), two–time Chinese Champion (2017, 2018), Brazilian Champion Warta Zawiercie (2019). His dazzling demeanor ranks him tenth on the most handsome volleyball players list.

Ishikawa now represents Power Volley Milano in the Italian Volleyball League. He is not only well-known for his athletic abilities but also for his adorable appearance, earning him a ninth position on the list of the most attractive volleyball players.

Related
Can You Use Basketball Shoes For Volleyball?

He made the NCAA Final Four for his four years at LBSU (2016–2019) and won the NCAA Championship twice (2018, 2019). His innocent appearance only adds to his appeal, making him one of the most attractive volleyball players.

Volleyballer with elegance Brenden Lee Sander is a volleyball player from the United States who plays for Poland’s Cerrado Enea Czarni Radom club.

Taylor Sander, his older brother, is a volleyball player who competes for the US men’s national team. He is ranked 5th on the list of the most attractive volleyball players due to his charming personality.

Jenia Grebennikov is a Russian-born French volleyball player who plays for the France men’s national team and the Russian club Zenit Saint Petersburg.

He is the 2015 European Champion and World League gold medalist. In 2011, Jenia Grebennikov made her debut for the French national team. Jenna competed in the 2014 World Championship, which was held in Poland. His dashing appearance earns him the number four position on our list of the most attractive volleyball players.

Ivan Zaytsev, also known as “the Tsar,” is a Russian-born Italian volleyball player who serves as the Italian men’s national volleyball team captain.

Aaron Joseph Russell is an American volleyball player who plays for the United States men’s national team and the Italian club Gas Sales Piacenza. He is one of the most attractive players in the sport. At the 2016 Olympic Games, he was a member of the bronze-winning USA team.

He made his senior national team debut in the 2014 World Championship Qualifier, where he was awarded Best Spiker and helped the United States win gold. He is one of the most attractive volleyball players because of his facial cuts and appealing personality.

One of the greatest, as well as one of the most handsome players. Matthew  Anderson is a volleyball player from the United States. He is a US men’s national volleyball team member, having competed in the Olympic Games, 2014 World League, and 2015 World Cup with them.

In September 2013, the United States, with Anderson, won the NORCECA Championship. He was a team member that won the 2014 World League gold medal on July 20, 2014. Due to his charming and dashing personality, he is recognized as the most attractive volleyball player.

Can You Use Basketball Shoes For Volleyball?

Best Sunglasses For Beach Volleyball in 2022