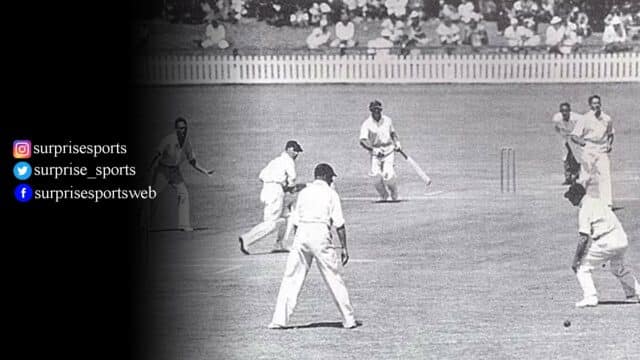 In the modern era, test matches can last up to a maximum of five days, but this wasn’t always the case, and, on occasions, timeless tests went on for a very long time.

The longest game in cricket history took place in Durban in March 1939. South Africa was the hosts, and England was the visitor as the fixture adopted a timeless test format.

There were nine full days of play, but the game eventually finished in a draw as the tourists had to catch their boat back to England.

History of The Longest Cricket Match – the “Timeless Test”

The longest test came at the end of England’s tour of South Africa in 1938/39. In keeping with many games before the Second World War, this was scheduled to be a timeless test.

The teams went into the fifth and final test with England enjoying a slender 1-0 lead, so the series was alive, and there was plenty to play for.

South African skipper Alan Melville won the toss and elected to bat first. It looked like a good decision as his side reached 530 in the first innings, with Pieter van der Bijl top scoring with 125.

England responded with 316 all out, and by this stage, the match had already entered the fifth day. The game would be heading towards a dull draw by today’s standards.

But this was a timeless test, and the teams plowed on. South Africa was next to bat, and their total of 481 saw the match go into the sixth day. When they were dismissed, England began that unlikely run chase after being set 696 to win the game.

No play was possible on day eight, while the following day was designated a rest day. On days nine and ten, England set about their remarkable run chase.

Bill Edrich led the charge with 219, while Paul Gibb and the skipper Wally Hammond passed three figures. The tourists would have been favorites to complete that chase, but South Africa would have been hopeful of the win with those key batsmen dismissed.

Sadly, that boat’s departure left England stranded on 654/5, and we will never know how this game would have finished.

When timeless tests were in play, some matches extended beyond today’s conventional duration of five days. At the end of England’s tour of the West Indies in 1930, another game had to be declared a draw because the tourists’ boat was leaving.

The match in question occurred at Sabina Park in Jamaica, where it saw seven days of play. No play was possible on days eight and nine, and the match was drawn.

In the interim, England had started with a massive first innings total of 849. This was a world record at the time, as was Andrew Sandham’s knock of 325. West Indies made 286 in reply while England compiled 272/9 in their second innings.

That left the home side with an unlikely fourth innings target of 838 to win. They had reached 408/5 when it was time for the boat to leave.

1939 saw another protracted test match as Australia hosted England at the Melbourne Cricket Ground in 1929. This was designated as another timeless test, and it was one that saw eight days of play.

This is the first of our long test matches to achieve a result as Australia went on to win the game by five wickets. England batted first and reached 519 in the first innings, with Jack Hobbs and Maurice Leyland scoring centuries.

Australia almost achieved parity in reply, with Don Bradman and Bill Woodfull passing three figures as they compiled 491. England didn’t fare well the second time, as they were dismissed for 257. Australia was set a target of 286, which they chased down with five wickets to spare.

It took eight days of play for that game to reach its conclusion.

Many test matches took seven days, but this was their earliest. The game between Australia and England was played at the SCG, and poor weather on two of those seven days helped to extend the match.

This is an interesting game as it was quite a low scorer compared to the others on this list. England made 324 and 214 in their two innings, while Australia, after compiling 176 in their first knock, was dismissed for 292 the second time to lose the match by 70 runs.

While it might not have been the most exciting of test matches, I think it’s a shame that the longest game in cricket history came to an end when it did. England might have broken a record with an incredible run chase if there had been just one more day’s play.

The game was drawn with the tourists needing just 42 runs to win with five-second innings wickets intact. South Africa would have been hopeful, but if England had chased down 696 to win, that would have been a record that is unlikely to have ever been matched.

In the modern day, where the schedules are packed, there is no room for timeless tests, which is probably a good thing. Five days is enough, but it is interesting to look back at a different time and consider some remarkable matches.