Alexander Ovechkin is a Russian professional ice hockey player with a net worth of $85 million. He is currently serving as a left winger and captain of the National Hockey Club Washington Capitals. Read the article to know Ovechkin’s net worth, salary, earnings, wife, and other information.

At the age of 16, Ovechkin joined Dynamo Moscow in the Russian Super League (RSL). He made his professional debut in the 2001–02 season, appearing in 21 games and scoring four points. On August 5, 2005, Ovechkin chose to opt out and signed with the Capitals. The contract was a three-year, rookie-minimum contract for $984,200 per season.

During the 2005-06 season, Ovechkin led all NHL rookies in goals, points, power-play goals, and shots. He finished third in the NHL in scoring with 106 points. During the NHL lockout in the first part of the shortened 2012-13 season, Ovechkin and teammate Nicklas Bäckström returned to Dynamo Moscow to play in the KHL.

On December 20, 2013, Alexander Ovechkin scored his 400th career goal against the Carolina Hurricanes. He was the sixth fastest player in history to reach that milestone. Ovechkin had “the most dominant postseason of his career” in 2018, averaging 20:44 minutes of ice time per game and scoring 15 goals and 27 points in 24 games.

On December 6, 2018, Ovechkin became the ninth player in NHL history to surpass 5,000 shots on goal, accomplishing this feat in just 1,031 games. Ovechkin was named captain of the 2019 NHL All-Star Game, but he announced that he would be sitting out to heal. In a 3–2 loss to the New Jersey Devils on February 22, 2020, Ovechkin scored his 700th career goal in the third period, becoming the seventh player in NHL history to do so. Recently on 20 April 2022, he scored his 50th goal of the season for the 9th time in career. Additionally, he is the oldest player to do so in this season.

Alexander Ovechkin’s Net Worth and Salary:

In 2023, Ovechkin’s net worth is $85 million. He is one of the richest ice-hockey players right now. He currently has a 5-year contract worth $47.5 million with the Washington Capitals. Additionally, he earns $9 million yearly from the club.

Throughout his career, Ovechkin has earned a good list of sponsorships. His sponsorship list included CCM, Papa John’s, and Coca-Cola. Furthermore, he was a Nike endorsed athlete. Unfortunately, he lost most of endorsements due to recent Russian invasion on Ukraine as he is a Russian-born player.

Alexander Ovechkin is married to Anastasia Shubskaya. Better known as Nastasiya, she is a Swiss model and film producer. They pair got married in 2016. They currently have two sons together, Sergi Alexandrovich Ovechkin and Ilya Aleksandrovich Ovechkin. 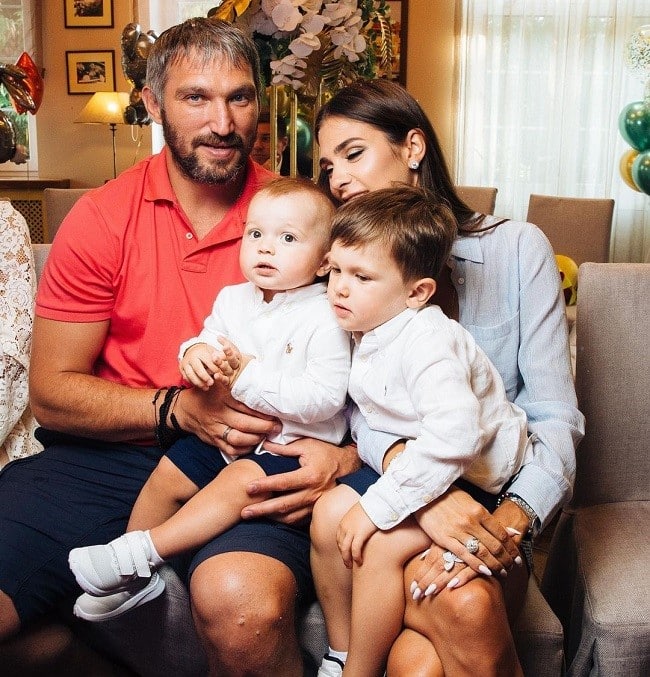 Alexander Ovechkin was born on 17 September 1985 in Moscow, Russian SFSR, Soviet Union. At present, he is 36 years of age.

Alexander Ovechkin is one of the greatest players of the NHL. He has scored many records throughout his career. For his great playing styles and techniques, he is called “Alexander the Great” by his friends and families.

What is Alexander Ovechkin’s Net Worth in 2023?

How Tall is Ovechkin?