Davante Adams is an American footballer with a net worth of $25 million. He is currently serving as a wide receiver for the National Football League club Las Vegas Raiders. This article contains information on Adams’ net worth, salary, earnings, wife, age, etc.

Adams started playing as a professional football player in the year 2014. Both of the Packers’ ace players Aaron Rodgers and Davante Adams are considered the backbone of their team and work together quite efficiently.

Adams is Rodgers’ favorite man for the ball and also the top route runner in the game. The California native was also an exceptional football player at his school. He led his school’s Palo Alto Vikings football team to a CIF state championship.

Very few people know that Davante Adams was also an exceptional basketball player in his school. After reaching college, he continued his excellent football form. He started his professional career in 2014 and became the official Green Bay Packers player. The year 2016 proved to be a fruitful year for the American footballer, as he set the rookie record for his team.

Adams holds many records to his name. He grabbed the Pro Bowl award four times from 2017 to 2020. He became the First-team All-Pro and the NFL receiving touchdowns leader in the year 2020. His 2018 season is considered the most successful one to date. He only played 15 games and ended up having 111 receptions for 1386 yards.

The Packers traded Adams to the Las Vegas Raiders for their 2022 first-round and second-round picks on March 18, 2022. Adams made his Raiders debut against the Los Angeles Chargers in Week 1. In the 19-24 loss, he caught 10 passes for 141 yards and a touchdown.

Davante Adams’ Net Worth and Salary:

At present, Nike is Adam’s major athlete sponsor. Additionally, he is affiliated with Pepsi, Head & Shoulders, and Associated Banc. Furthermore, he is available via the IAmApp platform.

Davante Adams is married to Devanne J Villareal. The happy couple tied the knot in the year 2018. Both were college sweethearts and now have become the golden couple in the NFL. The pair shares two children, a son, and a daughter. 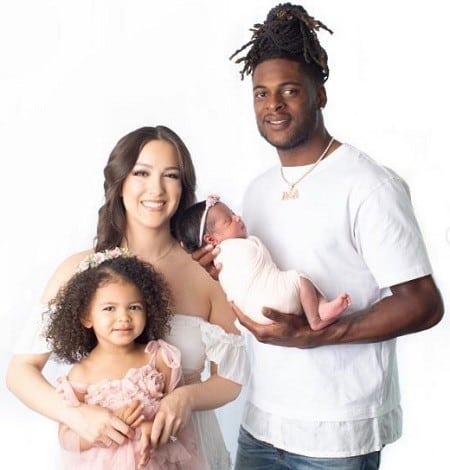 Davante Adams was given the nickname “Mr. January” by his Green Bay Packers teammate and quarterback Aaron Rodgers. He called him “Mr. January” as a symbol of hope for the team.

How Tall is Adams?

The football star is 29 years old.