Eric Dier is an English professional football player. He is currently participating in the Premier League club Tottenham Hotspur. Additionally, he is a defense-midfield side member of the England national football team. The article contains information on Eric Dier’s Net Worth, annual salary, earnings, wife, age, height, weight, and other details.

Dier was a member of the International Preparatory School in Lisbon. Then in 2010, he signed a professional deal with Sporting CP. The following year, he joined Everton on loan. During his loan period, Dier made ten appearances for the Everton U18s and helped the squad win the 2010–11 U18 Premier League. Dier had trouble adjusting to life in England. But he extended his loan at the Everton academy for another year in the summer of 2011.

On 2 August 2014, Dier confirmed a five-year transfer worth £4 million with Tottenham Hotspur. Dier produced a good first impression for Tottenham Hotspur in the Premier League. At the age of 20 years, the midfielder scored against West Ham United in his very first game appearance. He has made 237 appearances in the Premier League so far, contributing eight assists and 10 goals to the competition.

Eric Dier has participated in every single one of Tottenham’s Premier League games in 2021/20-22. There he made 35 appearances clocking 3,072 minutes. Throughout their 38 games, he has started all 35 of these outings. Furthermore, he was a member of the World Cup participant team England in 2018. There he also captained the final group stage match against Belgium. Additionally, he played in the 2016 Euro for England.

Dier is capable of playing as a center-back, right-back, and midfielder. His adaptability has been acknowledged as enabling Tottenham’s effective adoption of a flexible strategy, allowing them to switch systems swiftly within a single match. Dier claims that on his own, he has combined the playing styles of Portugal and England. Dier was said to as “more of a destroyer than a creator” by ESPN’s Mark Ogden in 2018.

Eric Dier’s Net Worth and Salary:

Dier’s net worth is €3.6 million (£3.2 million) in 2023. He extended his deal with Tottenham in the 2020-21 season for another 4 years. The extended deal was worth £15 million. The Premier League club currently pays him over £3.5 million yearly salary. Upon contract completion, he is expected to earn a total of £32 million from the club. 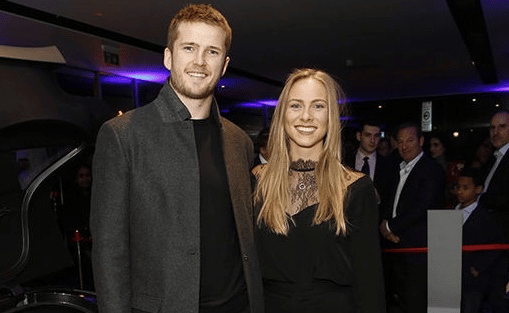 Eric Dier has been enjoying a successful football career at Tottenham. As a result, the player got various endorsement deals. He is affiliated with the German male grooming brand, Braun. The company signed him as its global brand ambassador in 2018. Dier is also the co-founder of the social network app, Spotlas. The footballer has a boot deal with Nike. As part of the deal, he was seen wearing the Nike Phantom GT2 Elite during the 2021-22 season.

No. Eric Dier is currently in a relationship with Maria Hansen.

How old is Eric Dier?