Justin Hodges is an Australian professional boxer who has a net worth of $1.5 million. Additionally, he is a former professional rugby player. Read the article to know Hodges’ net worth, salary, earnings, wife, and other related information.

Hodges played junior rugby league for the Cairns Kangaroos. He participated in the U11 Premiers from 1992 to 1998. Later, he shifted to a professional career in 2000.

In the 2000 NRL season, Hodges made his professional debut for the NRL club Brisbane Broncos. He played for two seasons under the club. When the Broncos failed to resign him the following season, Hodges signed with Sydney Roosters for three years. Playing 59 matches for the club, he earned 104 points overall.

In 2005, Justin Hodges signed back with his former club, Brisbane Broncos. There he played for the rest of his career. Participating in 178 matches, he scored 207 overall points. Only one month after being named the solo captain of the Broncos in 2015, he left the position to focus on his performance. That year, he participated in his final career State of Origin series. Following the conclusion in August 2015, he announced his retirement from professional rugby. After participating in the 2015 NRL grand finals, he officially completed his retirement.

Hodges made his boxing debut against Rob Baron on February 9, 2019. Taking Baron out in just 75 seconds, Hodges grabbed the win. Throughout his three and half year-long career, he had 6 fights. Among these, he won 5 and lost one. He faced his first career loss in his third start. Knocking Hodges out in only 39 seconds, Darcy Lussick came victorious that night. Hodges is supposed to face Paul Gallen on the upcoming 15 September 2022 at Nissan Arena, Nathan, Australia.

Justin Hodges’ Net Worth and Salary

In 2023, Hodges’ net worth is $1.5 million. On average, he earns $100,000 as a guaranteed purse from each of his professional boxing bouts. Previously, Hodges played for the Australian rugby club Brisbane Broncos. There he earned an annual salary of AUD 350,000.

Hodges is a relatively new boxer. As a result, he isn’t established or popular in the scene yet. At present, he doesn’t have any endorsement deals.

Justin Hodges is married to Gyanne Watson. The pair have been in a relationship for a long time before finally marrying in 2010. The pair currently shares two children, a son and a daughter. 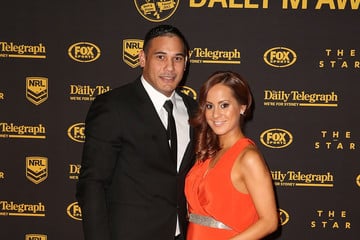 How old is Hodges?

How tall is Hodges?