Mackenzie Dern is an American professional mixed martial artist and Brazilian Jiu-Jitsu practitioner with a net worth of $1 million. She is currently ranked 5th in the strawweight division of UFC women’s ranking. Additionally, she is ranked 13th in UFC women’s pound-for-pound rankings. Read the article to know Dern’s net worth, salary, earnings, husband, age, and other related information.

At the age of 3, Dern began practicing martial arts with her parents. By age 14, She was skillful enough to compete in the adult division. Mackenzie maintained a balanced relationship between her mother and father when her parents divorced in 1996.

Dern made her professional mixed martial arts debut under the Legacy Fighting Alliance. She won her debut match at Legacy FC 58 via unanimous decision. She fought in the LFA campaigns till October of 2017. Within the period, she had a total of 4 fights and won all of them successfully.

On December 8, 2017, Mackenzie Dern participated in the Invincia FC 26 event. There she faced Kaline Medeiros and won via unanimous decision. Following this, she shifted to the Ultimate Fighting Championship.

Dern first joined UFC via a promotional match. At the UFC 222, she faced Ashley Yoder and won the bout via split decision. During her 3rd start at the discipline, she faced her career’s first loss. In 2019, she lost a fight against Amanda Ribas via unanimous decision.

At present, Dern has a record of 12 wins and 2 losses from 14 professional bouts. Before joining professional mixed martial arts, she mostly competed in Brazilian Jiu-Jitsu events and competitions. There she has a record of 75 wins, 25 losses, and a draw from a total of 101 matches. She is a former 1st ranked IBJJF competitor. As of right now, she is placed 6th in the female division. She will be facing Yan Xiaonan in the upcoming UFC Fight Night 211.

Mackenzie Dern’s net worth is $1 million in 2023. She has earned around $900,000 from her professional mixed martial arts career. On average, the martial artist earns $70,000 as a guaranteed payment from each bout. Below is a list of her earnings from recent fights –

Dern has collected a list of endorsement deals for extra annual income thanks to her successful and long-running martial arts and BJJ career. Her current sponsors are War Tribe, Zebra, Damage Control, My Protein, Dopamina, Hayabusa, and KillCliff. She is currently being promoted via Betmotion.

Dern is married to Wesley Santos. Santos is a professional surfer. The pair welcomed their firstborn daughter in 2019. During that period, Dern had to put her career on hold. 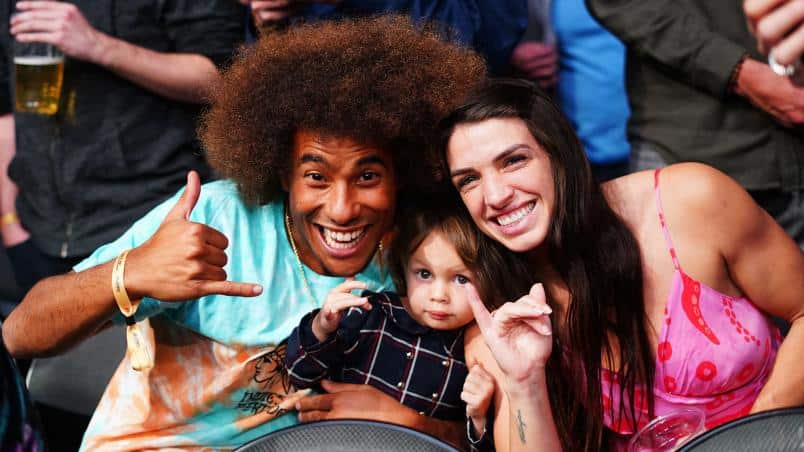 Her Height and Weight

How Tall is Dern?

How Old is Dern?