Pablo Mari is a Spanish professional footballer. He currently plays as a center-back for the Premier League club Arsenal. Read the article to know more about Pablo’s net worth, salary, earnings, wife, age, height, weight, and other details.

Pablo Mari was born in Almussafes, Spain. He first started playing in RCD Mallorca’s youth system. His professional debut was also in the same club. There he made his debut as a senior in December of 2011. He played as a substitute for Pedro Bigas in the 2-2 draw match against Granada CF. Following that, his second appearance came in May 2022. As he made his debut in La Liga as a substitute in a 1-0 win against Levante UD.

Mari signed his second professional contract with Gimnastic de Tarragona. There he made his debut on 12 October 2013. The match was a 2-2 draw over CD Olimpic de Xativa. He scored his first goal for the club in December of the year. There he scored a goal in the 2-1 win against Levante UD B.

In 2016, Mari transferred to Manchester City. The following day, the club loaned him to Girona FC for the rest of the season. The following two seasons, he was again loaned to NAC Breda and Deportivo de La Coruna.

Pablo Mari first joined Arsenal FC in 2020 as a loan. He played two games for the club before the season was canceled due to Covid-19. For his excellent defensive capabilities, the club later signed him on July 1, 2022. He scored his first goal for the club on 3 December 2020. It was Arsenal FC’s UEFA Europa League 4-1 home win against Rapid Wien. This year January, he shifted to Serie A club Udinese as a loan for the rest of the season.

Pablo Mari’s Net Worth and Salary:

Pablo Mari’s net worth is £8.9 million in 2023. He recently shifted to Udinese. The club will pay him his usual salary but won’t have the option to buy him permanently. He is a member of the Premier League club Arsenal FC. There he got a weekly wage of £49,000. This earned him an annual amount of £2.54 million. Before that, he played as a loan player under Manchester City. The club paid him £17,000 weekly. Mari’s current market value is €5 million. Previously it peaked at €7 million in 2020.

Pablo Mari is currently married to Veronica Chacon. The pair have been in a relationship since 2015. They finally got married this year. The pair shares a child, a son sharing the same name as Mari’s father. 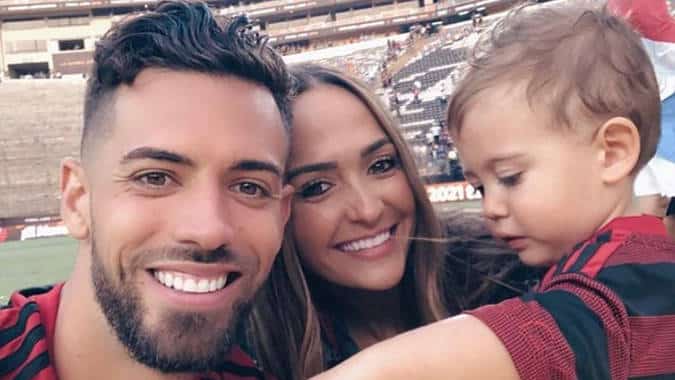 Mari was born on 31 August 1993 in Almussafes, Valencian Community, Spain. Currently, he is 28 years old.

Pablo Mari has a boot-related deal with the German sportswear company, Adidas. As part of their deal, he used the Adidas Predator Edge.1 Low during the 2021-22 season.

How old is Mari?

The Spanish footballer is 28 years old.