Phil Mickelson is an American professional golfer. He is a LIV Golf regular with 45 PGA Tour wins including six major championships. Read the article to know Mickelson’s net worth, salary, earnings, wife, and other related information.

Mickelson is known for his outstanding sports display, especially in the 90s and early 2000. Mickelson started his golf journey at a very young age. He grew up watching his father who was also a golf player. Due to his exceptional golfing skills, he was awarded a scholarship to his university.

In 1993, Phil Mickelson bagged his first professional win and subsequently won at least one tournament in the next three years. 2001 proved to be an exciting year for Phil as he became the number two in the rankings after Tiger Woods. After that both the pros developed kind of a rivalry in their game.

Though his game was on top, Mickelson could not succeed in big tournaments like US Open, British Open, or the PGA championship until 2003. However, the jinx was finally broken and the California native grabbed a major victory in the Masters in the year 2004. This huge win brought a streak of more wins in the upcoming years. The 2005 PGA Tour championship title followed by the 2006 Masters wins brought him confidence in his game. 2021 also proved a good year for him as he won the PGA Tour championship at the age of 50. Thus, proving himself to be a consistent athlete.

At present, he has 45 PGA Tour titles on his winning list. Among these, 6 are from major champions, 3 from Masters, 2 from PGA Championships, and one from Open Championship. He has been in the top 50 of OWGR worldwide rankings for 25 years constructively. Furthermore, he spent around 700 weeks in the top 10 there.

Phil Mickelson’s Net Worth and Salary:

Phil Mickelson’s net worth is $300 million in 2023. From his long-running golf career, the player garnered around $800 million. Among this, he earned over $96 million only from his PGA career. Previously, his yearly earnings were around $80 to $100 million when playing golf actively. He still earns $50 million yearly, mostly from endorsement deals. The golf legend is ranked second in PGA Tour’s all-time money list.

Phil Mickelson married Amy Mickelson in 1996. The couple first met in 1992 at Arizona State University. The pair are happily married now and have three children together. 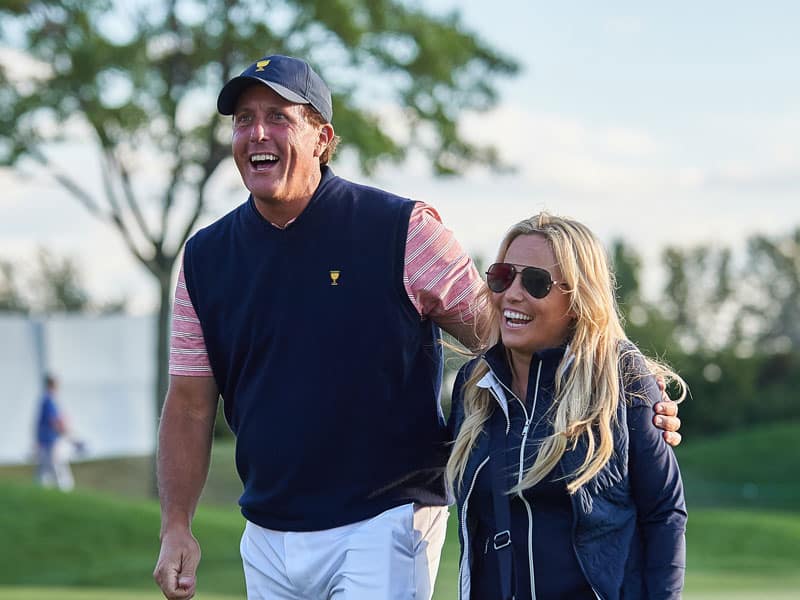 Philip was inspired by his father’s swing and techniques that made him play from his left hand rather than displaying his natural right-handed play. Consequently, becoming famous by the nickname “Lefty”.

What are Mickelson’s Career Earnings in 2023?

His career earnings are more than $800 million.

How Tall is Mickelson?