Russell Wilson is an American football player. He serves as a quarterback for the NFL franchise Denver Broncos. The article contains detail on Wilson’s net worth, salary, earnings, wife, age, and other information.

Wilson was a sports fanatic even when he was a child. During his high school days, he played three sports: football, baseball, and basketball. However, football was the sport in which he performed best.

The Ohio native has made his mark ever since he joined the Seahawks in 2012. He has led his team to playoffs seven times after his joining and twice into the Super Bowls. He has been the key player in his teams’ achievements.

Russell Wilson’s debut season also turned out to be a successful one. In his first season, he tied Peyton Manning’s record and became the Pepsi NFL Rookie of the Year. He won the Super Bowl XLVIII against the Denver Broncos.

Throughout his career, Wilson has impressed his fans with his first-season performance. There he tied Peyton Manning’s record and became the Pepsi NFL Rookie of the Year and won by any NFL quarterback in his whole career.

“The Professor” is also among the four quarterbacks who have a career passer rating of over 100. In 2019, he was named the highest-paid player in the NFL. Wilson is also a successful part-owner of the Seattle Sounders of Major League Soccer (MLS). His team won the MLS Cup in the year 2019. In addition to that, he won the Walter Payton NFL Man of the Year title in 2020. Wilson’s previous club the Seahawks traded him to Denver Broncos. He joined the Broncos on March 16, 2022.

Russell Wilson’s Net Worth and Salary:

Russell Wilson’s current net worth is $165 million in 2023. The player earns a base annual salary of $24 million from his current club. From his 10 seasons long career, he has earned $181,362,520. Previously, he earned an annual salary of $22 million from Seahawks. As per the new contract, his salary will increase to $24 million in the 2023 season. The player earns an additional good sum from his endorsement contracts.

Russell Wilson is currently married to Ciara Princess Wilson. Ciara is a popular American singer, songwriter, and dancer from Texas. The couple got married in 2016. At present, they have three children and are living happily together. 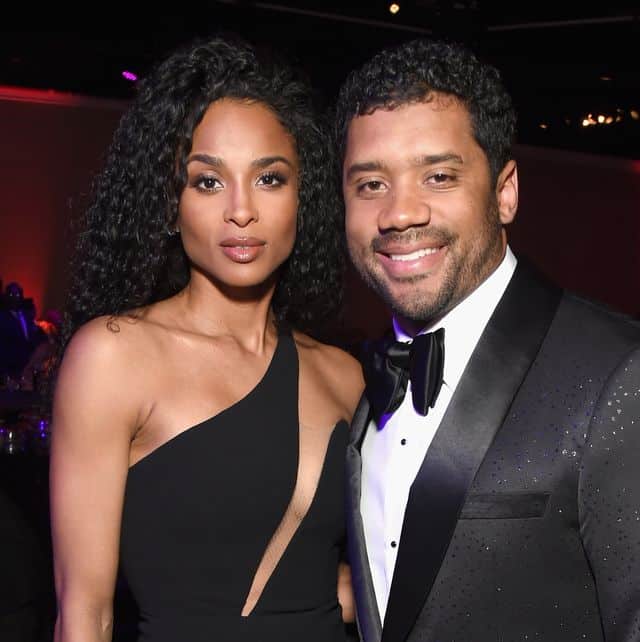 Wilson has had a troubled married life in the past. He first got married to Ashton Meem in 2012. Both spent two years together but eventually got divorced for some undisclosed reason.

Wilson was born on 29 November 1988 in Cincinnati, Ohio. He is currently 32 years old. He still has a lot of years to play, based on the average NFL professional’s age.

The American football quarterback has a height of 5 ft 11 in (1.80 m) and he weighs 215 lb (98 kg). He has a decent height and an athletic and muscular physical build.

Russell Wilson is given the nickname “The Professor” by the football fraternity. Some fans also like to call him “DangeRuss”.

Thanks to his successful NFL career, Wilson has garnered an impressive list of endorsement contracts. He is currently affiliated with Amazon, Alaska Air Group, American Family Insurance, Bose, Braun, Duracell, Levi’s, Mercedes Benz, Pepsi, United Way, and Wilson Sporting Goods. The player also serves as a brand ambassador for the Charles Ray III Diabetes Association. From his endorsements, his annual average income is around $14 million.

Ryan Harris: ‘The concern is rising’ with Denver Broncos | Brother From Another

What are Wilson’s Career Earnings in 2023?

Russell Wilson’s career earnings are more than $181 million in 2023.