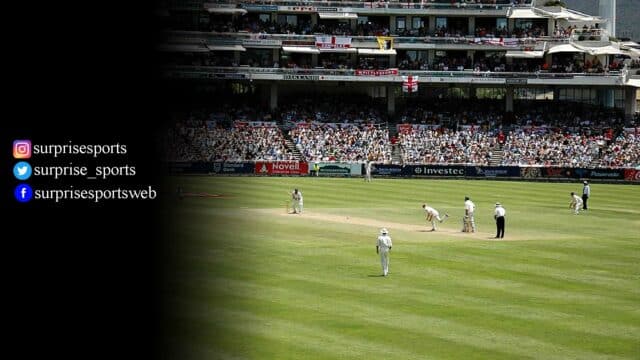 How long does a cricket match last? We’ll be answering that question as we work through this round-up.

How Long Does a Cricket Match Last?

The answer to that question depends on the format of the game. For test matches, games will last up to five days. In limited overs fixtures, these are scheduled to be completed in one day.

Each of the one-day formats has a restriction on the maximum number of overs that can be bowled.

How Many Days a Test Match Scheduled?

The vast majority of test matches are scheduled to last for five days. Within those days, six hours of playing time are allocated. Days are divided into three sessions – morning, afternoon, and evening.

It’s stipulated within the laws of cricket that 90 overs should be bowled in a day. There is some provision for the finish time to be pushed back if the bowling side hasn’t completed that 90-over allocation.

In rare circumstances, it has been agreed that four-day tests are acceptable for men’s cricket. This was seen in a game between England and Ireland in 2019 and South Africa v Zimbabwe in the 2017/18 season.

In women’s cricket, test matches are currently scheduled for four days. After some frustrating draws, there are many suggestions for introducing five-day women’s tests.

First-class cricket matches work in a similar manner to tests. However, the key difference is that they usually last up to four days.

Each of the major cricket-playing countries has the first-class competition. Within those four days, the play is set to last six hours and split into those three sessions.

The rules relating to overs may vary around the world. In England, the County Championship asks teams to deliver 96 overs daily.

While all Limited Overs matches are intended to be finished in one day, there are occasional exceptions. For the biggest games, such as the knockout rounds in World Cups, there may be a reserve day on hand in case of bad weather.

There have been some changes to the duration of ODI matches in recent years, but they have been standardized for some time now. Each game sees sides able to bat for a maximum of 50 Overs.

So, up to 100 overs bowled in a day’s play could be. There is a total of eight hours available for the day with provision for a 45-minute break between innings.

As well as international matches, most countries also have a domestic 50-over tournament where the same rules on duration apply.

T20 matches are games where each side can bat for a maximum of 20 overs. They will bat for that full 20-over allocation if they keep wickets intact.

There will, therefore, be scope for a maximum of 40 overs to be bowled in a day. There are maximum time limits that can range up to four hours.

The reasons for this discrepancy in timings relate to the laws of each tournament. In particular, we are talking about time-outs. Some T20 competitions, most notably the Indian Premier League, have two timeouts in each innings – one for the batting team and one for the bowling side.

These will only take up two and a half minutes each time, but they slow down the game.

There may also be differences in the break between innings, but this will generally be restricted to ten minutes.

This is the shortest official form of the game. T10 cricket sees each side allocated ten overs. If they keep wickets intact, that full 10-over allocation will be delivered by the bowling team.

This means there will be a maximum of 20 overs bowled during the game. The fast format of T10 means that we often see two games played on the same ground in one day.

In terms of duration, 1.5 hours is put aside for a full T10 game, and there will be a break of 10 minutes between innings.

So far, only one country has adopted the 100-ball game. The England and Wales Cricket Board implemented The Hundred in 2021. As the name suggests, each side can bat for 100 balls.

There will be up to 200 deliveries bowled in the game.

There are stricter time limits for 100 ball matches, and they should not take longer than 2.5 hours. This includes time-outs in both innings.

If the bowling side takes too long to deliver their allocation of 100 balls, the umpires will impose fielding restrictions by bringing an extra player into the 30-yard circle.

The Hundred also has a break between innings that will last for ten minutes. It will be interesting to see whether other countries adopt this format moving forward and whether or not they make any changes to those timings.

It’s a fairly basic thing to understand and can certainly help when watching a game on television. We often know how many overs to expect in a day’s play, but how long will that day last in terms of hours and minutes?

It also helps to understand the question of slow over rates and the penalties that can be put in place for these. Hopefully, this article has cleared a few things up, and you’ll have greater knowledge as to how long a game should take in each of those five formats.