Oleksandr Usyk is a Ukrainian professional boxer. He is currently a world champion in two different weight classes. Read the article to know Usyk’s net worth, salary, earnings, age, height, wife, and other news.

During amateur, Oleksandr Usyk won his first three matches against little-known opponents at the 2006 European Championships. He won a gold medal in the 2012 Olympics. The following year, he turned pro at the age of 26.

Usyk made his professional debut on November 9, 2013. There he knocked out Mexican fighter Felipe Romero in the fifth round. He knocked out Epifanio Mendoza in four rounds the following month. Usyk made his debut in Germany on the undercard of Klitschko-Leapai in April 2014. There he defeated Ben Nsafoah via third-round knockout at the Koenig Pilsener Arena. It was his 3rd professional fight.

On October 4, 2014, Oleksandr Usyk won his first title. Defeating South African boxer Daniel Bruwer via round 7 TKO, he won the Interim WBO Inter-Continental cruiserweight title. He then defended the title for two months. He defeated Johnny Muller in August of 2015 to win the Light Heavyweight championship title.

In 2020, Usyk fought against Derek Chisora and won the WBO Inter-Continental heavyweight title. Then in 2021, he faced Anthony Joshua to win the WBA (Super), IBF, WBO, and IBO heavyweight titles. They will face each other again on coming August 20 for a revenge match. Usyk is currently ranked as the world’s second-best active boxer pound for pound by the Ring, and TBRB. Additionally, he is the second-best heavyweight boxer according to the Ring, BoxRec and ESPN.

Oleksandr Usyk’s Net Worth and Salary:

Usyk’s net worth is £45m in 2023. It is expected to go higher following the highly anticipated Usyk vs Joshua 2 rematch. Previously, his net worth was around only £10m. This jumped to more than triple, thanks to his first match against Anthony Joshua. He is expected to get a 50-50 split of the £65m guaranteed purse in the upcoming match. Which will increase thanks to the additional PPV share and endorsement deals.

Oleksandr Usyk is a married man. He is married to his long-term partner and a Ukrainian native, Yekaterina Usyk. They married in 2009 and have been together since. The couple share 3 children named Kyrylo, Mykhailo, and Yelizaveta together. 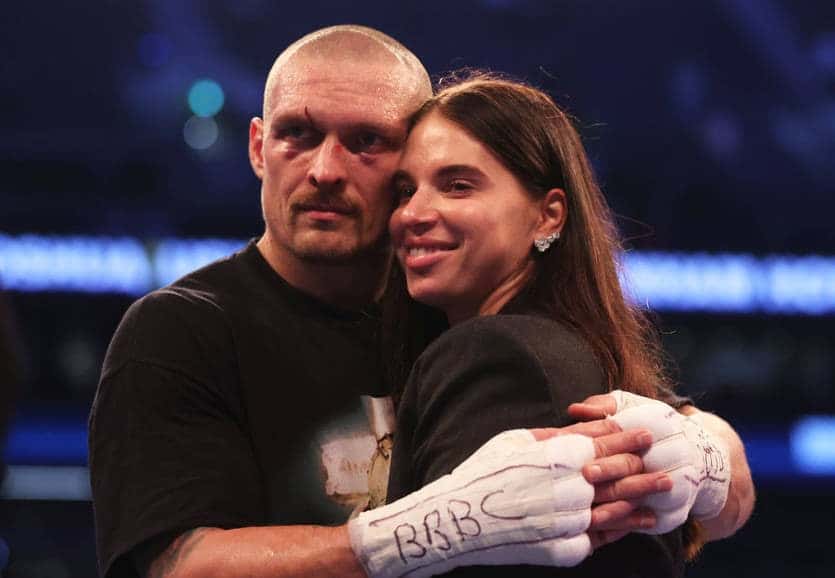 Usyk earns around $1 million yearly from his endorsement deals. He has sponsorship deals with brands such as BoxRaw, Jaxet, Lomus, Rival, WePlay Esports, etc.

The Speed And Skill Of Oleksandr Usyk

How Tall is Usyk?