Tony Ferguson is an American professional mixed martial artist with a net worth of $3 Million. He is currently competing in the Lightweight division of the Ultimate Fighting Championship (UFC). Read the article to know Ferguson’s net worth, salary, earnings, wife, and other related details.

Ferguson began his professional mixed martial arts career in 2007 by competing in local organizations across California. Among his notable victories throughout his early career is a victory against kickboxing champion Joe Schilling.

Ferguson made his official UFC debut on the last episode of The Ultimate Fighter season 13, which was the season in which he was victorious. He fought Kevin Lee to earn the title of interim lightweight champion of the Ultimate Fighting Championship. The championship was eventually taken away from him due to a horrifying accident he sustained. Despite this, he is referred to as the “People’s Champion” by his followers.

Ferguson had a perfect record in the twelve fights leading up to his battle with Justin Gaethje. He sought to win the interim championship for the second time, but ‘The Highlight’ halted him in his tracks. His first fight in 2020 was against Charles Oliveira at UFC 256, when he was defeated by a unanimous decision to end his winning streak. Following this, Ferguson has been on a losing streak throughout 2020-2022. Most recently, he was KO’ed by Michael Chandler at UFC 274. He is scheduled to face Li Jingliang at welterweight in the upcoming UFC 279.

Tony Ferguson’s style is impossible to counter, and he has annihilated his opponents. His speed and pressure make it tough for his opponents to catch up with him and overtake him. He is the most unconventional and surprising competitor in the Ultimate Fighting Championship.

Tony Ferguson’s Net Worth and Salary

Reebok has sponsored Tony Ferguson from the beginning of his professional career. Monster energy drink is another of his major sponsors. Recently, the player signed an endorsement deal with RDX Sports. He was also affiliated with Brock Lesnar’s Team Death Clutch.

Ferguson is married to Cristina Servin. The pair first met in 2009. Later in 2011, they got engaged and officially married in June 2012. The couple shares a son named Armand Anthony, born on April 28, 2016. 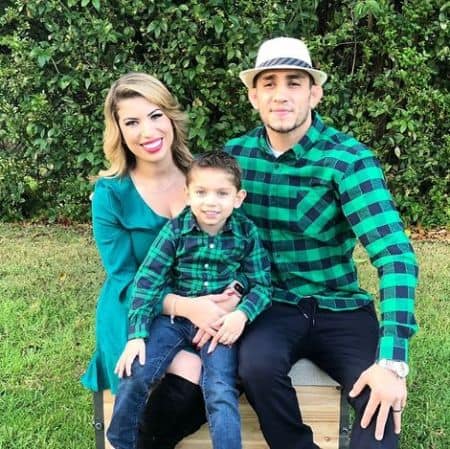 The American mixed martial artist is 6 ft 0 in (1.83 m) tall and weighs 155lbs (70 kg). He generally fights under the lightweight and welterweight divisions in UFC.

Ferguson has the in-ring nickname “El Cucuy”. He explained in a recent interview that he got the name from his first trainer.

He has earned over $3.5 million in his professional career.