Tony Finau is an American professional golfer who plays on the PGA Tour. From the article, you can learn detail about Finau’s net worth, salary, age, height, wife, and recent news.

Finau was born on September 13, 1989, in Salt Lake City, Utah. In 2006, during his amateur career, he won the Utah State Amateur Championship. There he defeated Daniel Summerhays to win the event. He was also a two-time medalist in the event. In 2007, Finau was elected Athlete of the Year at West High School.

The American golfer then turned professional out of high school in 2007. He started with some mini-tours such as Gateway Tour, NGA Hooters Tour, and National Pro Tour. His first big achievement came in 2009 when he finished second on Big Break Disney Golf.

Finau’s PGA Tour Canada Debut in 2013. There he made seven cuts in eight starts. Then the same year, he finished T3 for earning his Web.com Tour card for 2013. Finau achieved his first title at the Stonebrae Classic in August 2014. His season finished with ranking 12th in Web.com Tour Finals and PGA Tour card for next season.

In 2015, Finau joined the PGA Tour and amassed five top-10 finishes in 28 starts through the Wyndham Championship. His first PGA Tour victory came from the 2016 season Puerto Rico Open event. Recently, last year, he got his second PGA Tour victory from the Northern Trust by defeating Cameron Smith in a playoff. With this, he earned a playoff record of 2-3 in his PGA Tour career. The golfer recently earned his 3rd PGA Tour victory at the 3M Open Event.

Tony Finau is married to Alayna Galea’i-Finau. The pair have five children and are currently living in the city of Lehi in Utah. 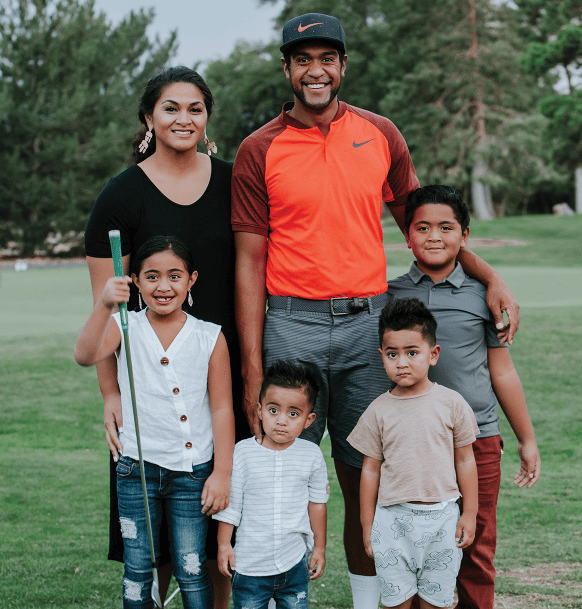 Milton Finau’s nickname is Tony. He is known as “Tony Finau” among his friends, fans, and peers. He is also called by the nickname “Big Tone” by the media.

How old is Finau?

What is His Career Earning Amount?