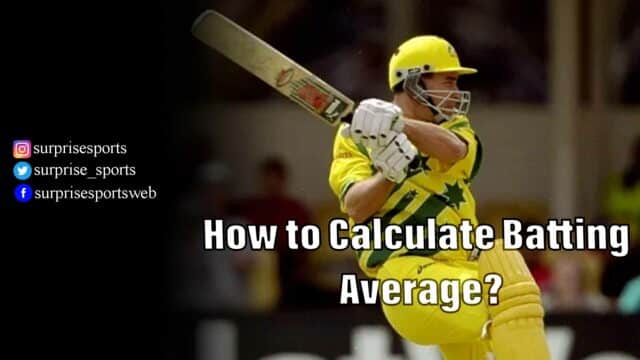 This is the most important statistic for any batter so let’s look at the batting average, what it means and how it is calculated.

What is a Good Batting Average in Cricket?

The answer to this question will depend on the exact form of the game. In test cricket, a good batting average is around the 40.00 mark.

How is Batting Average Calculated in Cricket?

To calculate a batting average, we need two figures:

Note that we don’t necessarily use that batter’s total number of innings. If they are not out at the end of an innings, the runs are carried over to the next time.

Note that the final figure is rounded to two decimal places.

That’s an example, but you can use that calculation to gauge anyone’s batting average in any game format.

Why is Batting Average Important?

Batting averages can tell us how good someone has been over their career, but it’s more important for current players to have a good average.

When the time comes for international selection committees to meet, they will look at statistics to help them come to a decision.

Batting averages can be read at any stage. Those selectors might want to assess an overall average across a player’s career. However, it may well be that a batter started slowly before scoring more heavily later.

It’s all about the current form, so the season averages will have more relevance. All of these statistics are readily available and easy to access.

In summary, it’s really important for a batter to maintain a good batting average. It will help to ensure future selection for his or her domestic side and, potentially, at the international level.

Now that we understand just how important a good batting average is, what are the levels that can be considered as ‘good?’

When I grew up watching cricket in the 1980s and through to the 1990s, it was said that a good batting average started at 40.00. I’d maintain that this is still the case, although some feel that the baseline now starts at 50.00.

It may be true that there were better bowlers around in the 1990s than today. Shane Warne, Muttiah Muralitharan, Glenn McGrath, Wasim Akram, Waqar Younis, Anil Kumble, Courtney Walsh, and Curtly Ambrose spring to mind.

Pitches may also have been of poorer quality than they are now. Players such as Virat Kohli, Joe Root, Babar Azam, Steve Smith, and Kane Williamson may be aiming at a 50 average, but not everyone is as good as they are, so I would maintain that 40 is a solid benchmark.

In ODI cricket, players have to bat at a higher tempo and put their wickets at greater risk than in test matches.

Once again, opinion will vary, but I would argue that a good ODI average is around 35 to 40.

If we look at some current players, Virat Kohli and Joe Root are averaging over 50 in this format. The best average of all time is that of Rassie van der Dussen which sits at 69.31 as of September 2022.

Once again, there will always be exceptions such as those, but most batters would be aiming for an ODI average of 35 as a minimum.

Batters tend to be far more reckless in T20 cricket. It’s about scoring at a high run rate, and keeping wickets in hand is less important.

Should we expect lower T20 batting averages as a result of this? You’ll see different opinions again, but a good batting average in this format might start at 30 and climb to 35 at the higher end of the scale.

In T20 internationals, both Virat Kohli and Mohammad Rizwan are averaging more than 50, but, once again, these are exceptional players. Over the course of a career, an effective T20 batter could consider an average of 30 or above to be ‘good’.

You might not obsess much about your batting average as a club cricketer. At this level, it’s about making contributions with the bat, maintaining your form, and helping your team win tight games.

Cricket fans, however, tend to be obsessed with statistics, so you may be one who updates their batting averages at the end of every inning.

At professional cricket levels, the average becomes far more important. It’s a perfect indicator of form and whether a player deserves to keep being selected for their domestic or international side.

We’ve seen some exceptional averages in all three formats, but the figures mentioned in each category will be considered to be ‘good’. Anything above that will be excellent.