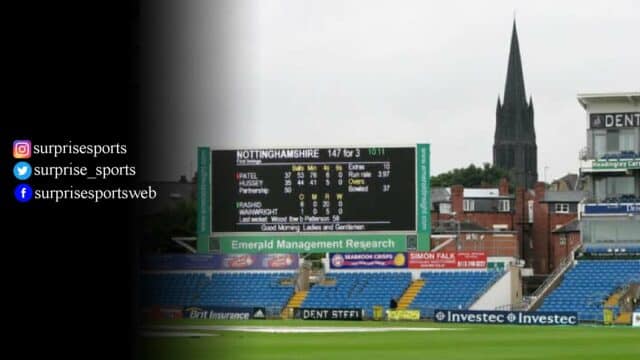 In this article, I will look at one of the more important statistics in cricket, so let’s consider the subject of run rate.

What is Run Rate in Cricket?

A run rate is the average number of runs that a batting side has scored in each over. The run rate takes the total runs scored and the overs bowled to calculate.

The run rate is simply an average, and the exact amount of runs scored in each over will differ.

How to Calculate RR in Cricket?

Here’s an example from a T20 game

New Zealand scored 212 runs from their 20 overs against South Africa.

The run rate can also be taken at any mid-point in the game. If, for example, New Zealand had scored 72 runs at the end of the six-over Powerplay, the run rate at that stage would have been 12.00.

Each of these sections will be open to interpretation, and it should be remembered that the pace of the game is much faster in the modern era.

In test matches played today, a good run rate is considered to be somewhere between 3.5 and 4.

The world record team score at the time of writing is 498/4, made by England against the Netherlands in 2022. The run rate for that innings would have been 9.96.

That’s an extreme example. A good ODI score in 50 overs is anything from 300 upwards, so a good run rate in this format would be around 6.

In T20 cricket, we see several scores exceed the 200 mark, giving us a minimum run rate of 10.

However, an average team score in this format could be 160, so a good run rate is generally around the 8 mark.

It should be noted that these are average figures, and much will depend on the condition of the pitch. It could be fast and aid the batters or slow and difficult to score from.

The economy rate relates to the bowling side and, more specifically, to individual bowlers. We perform the following calculation if a bowler goes for 42 runs in ten overs in an ODI.

The bowler’s economy rate is, therefore, 4.2.

Economy rates are important to bowlers. Those with a lower economic rate offer more value to their team.

What is the Required Run Rate?

A required run rate is the number of runs per over that the side batting second will need to win the game.

Let’s say that Sri Lanka is chasing down a T20 target of 200 to win. After ten overs of their run chase, their score is 124. That leaves the Sri Lankans with 76 more runs to win with another ten overs at their disposal.

The calculation that follows is this one:

Net run rate (NRR) is usually used across tournaments such as the Indian Premier League or the Big Bash League. At the end of the group stage, NRR is used to decide which team is placed higher in the table if they are tied on the same number of points.

We, therefore, take the teams’ total run rate over the course of all the group games. Then we deduct the bowling attacks’ economy rate across the same number of matches. Take away the economy rate from the run rate, and we have our NRR.

Net run rates can sometimes show up as minus figures, usually when a team has lost more games than it has won.

Run rate is useful in many scenarios. Teams will look at average run rates on certain grounds, which helps them understand what a par score should be. If they are batting first, they will look to reach that par score as a minimum and, hopefully, go above it.

Run rates have certainly increased in recent years, and I would say this is down to the introduction of T20 cricket. In such a short game format, teams can keep wickets in hand and take more risks with their batting.

That approach to the game has crossed over into One Day Internationals, and we’re also seeing it in test cricket sometimes. In short, the game of cricket keeps evolving, and increasing run rates is a good measure.