Davis Love III is an American professional golfer with a net worth of $50 million. He is a regular competitor in the PGA Tour Champions events. Read the article to know Love’s net worth, salary, earnings, wife, and related details.

Love started playing golf at an early age, thanks to his former professional golfer father. During his college years, he played at the University of North Carolina. There he was a three-time All-American and all-Atlantic Coast Conference. Throughout his college career, he won a total of 6 titles. These included the ACC tournament championship.

In 1985, Love shifted to a professional golf career. Starting his debut season, he earned his PGA Tour card and started establishing himself as a strong player. In his 28-year-long PGA Tour career, he accumulated a total of 21 titles. His first PGA Tour win came from the MCI Heritage Golf Classic in 1987. He also became the winner of the 1997 PGA Championship.

Davis Love III joined the PGA Tour Champions series in 2014. Previously, he won his 20th PGA Tour event at the 2008 Children’s Miracle Network Classic to earn a lifetime exemption in the series. His best rank in PGA Tour Champions was 3rd solo, which he earned at the 2016 Mitsubishi Electric Championship. The player has an additional 1 European tour, 1 Japan tour, and 15 other event victories within his achievement list. Love also joined CBS as an analyst for a short period of 2020.

In 1992 and 2003, Love won the Players Championship event. He spent over 450 weeks in the top ten of the Official World Golf Ranking, achieving a record of 2nd place. He led the United States Ryder Cup teams in 2012 and 2016. In 2017, he was listed in the World Golf Hall of Fame. He recently ranked T43 at Sanford International. Currently, Love is ranked 92nd in the Champions Tour worldwide ranking.

In 2022, Love’s net worth is $50 million. He has earned over $45 million in prize money from only PGA-related events. His total career earnings are reportedly around $51 million. The golfer earns an additional sum annually from endorsement deals.

Love has accumulated a good amount of income through endorsement in his long-term professional career. Some of his sponsorship brands include Honda, Acura, Garden & Gun, Cigar Aficionado, etc.

Davis Love III is married to Robin Love. They got married in November 1986 and have been together since. The pair shares two children, daughter Alexia, and son Davis Love IV. 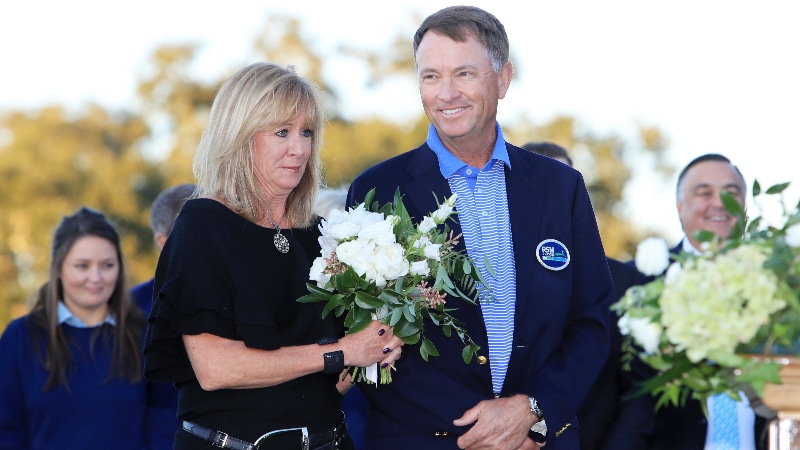 How old is Love?

The golf star is 58 years old.