Hector Bellerin is a Spanish professional footballer. He plays as a right-back or wing-back. Currently, he is a member of the Premier League club Arsenal FC and the Spain national football team. Read the article to know Bellerin’s net worth, salary, earnings, wife, age, height, wife, and all other information.

Hector Bellerin started his football career via Barcelona’s youth program. Upon completion, he shifted to Arsenal in the summer of 2011. The next year, he signed his first professional contract as a youth player. During the period he helped Arsenal reach 4th place in the NextGen Series 2012-13.

During the 2013-14 season, he played as a loan for Watford for two months. Bellerin made his Champions League debut against Borussia Dortmund on September 16, 2014, losing 2-0. On May 30, he was selected to start for Arsenal in the 2015 FA Cup Final. He assisted his team in keeping a clean sheet during a 4-0 victory over Aston Villa.

Before 2015’s season-opening, Bellerin extended his contract with Arsenal. He was involved throughout Arsenal’s successful 2016–17 FA Cup run. He took part in the Cup final when Arsenal defeated Chelsea by a score of 2-1. He achieved victory once more as the Gunners defeated Chelsea 4-1 on penalties to win the 2017 Community Shield.

Sadly, a calf issue kept him out of the opening five weeks of the 2018–19 season. Bellerin returned from injury on September 24, 2019. He came on as a substitute in Arsenal’s 5-0 EFL Cup win over Nottingham Forest. He scored his first goal of the 2020–21 season in a 4–2 Premier League victory over Leeds United. Following this, he shifted to Spain to join Real Betis for a season-long loan deal in August of 2021.

Hector Bellerin’s Net Worth and Salary:

Hector Bellerin’s net worth is £12.27 million in 2023. He has a contract with Arsenal worth £28.6 million. From the club, he earns £5.72 million annually. Recently, he shifted to Real Betis as a loan player. But the club offered him a weekly wage of £58000 to shift there permanently. Which is almost half of his current weekly wage of £110,000. Bellerin’s current market value is €20 million at present. Previously, it peaked at €40 million in 2018.

Hector Bellerin is currently in a relationship with Jasmine Muller. Muller is a popular Instagram model and professional YouTuber. She is affiliated with the beauty and fashion channel NAYVA. The pair met in 2020 and have been in a relationship since. They revealed their dating status in March of 2021. They haven’t engaged or married yet and don’t share any children. 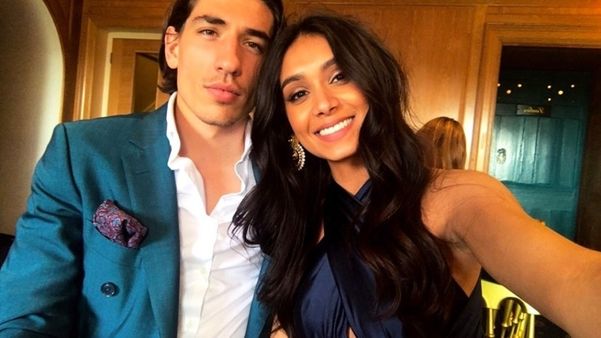 Previously, Hector Bellerin had a boot deal with Puma. The contract ended in 2019. Following this, he tried various brands without going with any endorsement deal. Before the 2021-22 season, he finally signed a new boot sponsorship deal with Mizuno Morelia. As per their contract, he used the Mizuno Morelia Neo III Beta MIJ throughout the previous season.

What is Hector Bellerin’s Net Worth in 2023?

How old is Bellerin?

The Spanish footballer is 27 years old.

No. Hector Bellerin is currently in a relationship with Jasmine Muller.