Jessica Pegula is an American professional tennis player. This right-handed player has been making her career in sports since 2009 and has her skincare line called Ready 24. Here, we will talk about Pegula’s net worth, career, age, and salary, height, weight, nickname, relationships, and the latest news.

Jessica Pegula Played her first WTA qualifying at Ponte Vedra Beach in 2009. In 2011, she won one doubles title on ITF Circuit. She played the first two WTA main draws in 2012, where she failed 1r at both. She also failed in qualifying three times (incl. US Open) that year but won two doubles titles on ITF Circuit. She could reach 3r once and fell 1r three times and in qualifying five times (incl. Australian Open, Roland Garros, Wimbledon) in 2013.

In 2015, Pegula Reached 2r twice (incl. US Open); fell 1r twice, and in qualifying four times (incl. Roland Garros and Wimbledon). She managed to SF at Washington DC; QF at Québec City; fell 1r once (US Open) and in qualifying seven times (incl. other three majors) in 2016. Paula fell 1r once and qualified once (US Open) next year while winning two doubles titles on ITF Circuit.

In 2018 Jessica Pegula became the runner-up in Québec City. She managed to win one WTA 125K Series doubles title and two doubles titles on ITF Circuit this year.

In 2021, she finished in the Top 20 for the first time (No.18, a career-high year-end ranking); semifinalist in Montreal and Qatar; quarterfinalist in five tournaments, including the Australian Open. She is currently participating in the 2022 Canadian Open’s Women’s Single.

Jessica Pegula Net Worth and Salary:

Jessica Pegula got married in October 2021. She married her longtime boyfriend, Taylor Gagahen, an American senior investment analyst. Taylor spent seven years working at Pegula Sports and Entertainment (a company owned by Jessica’s parents). After that, he became a director of corporate development and brand strategy.

Eventually, he worked on the marketing side for the Pegulas’ Buffalo Sabres, an NHL professional hockey team. Goldhagen graduated from Canisius College with an MBA.  He received his BSc in business administration from the State University of New York at Fredonia.

Taylor is well known for his work with animals too. The 27-year-old co-founded an animal welfare organization called, A Lending Paw. It supports rescue dogs and finds them new homes. 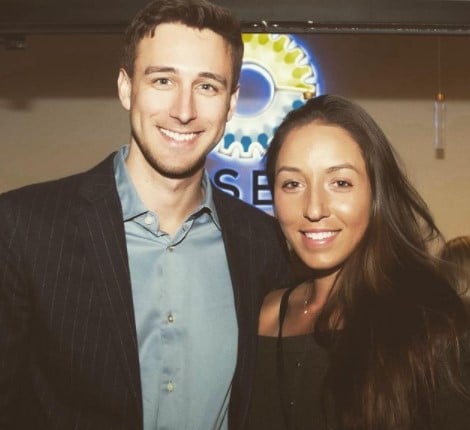 Jessica Pegula is 28 years old and was born on February 24, 1994. She is an American and has mixed ethnicity.

Pegula is sponsored by Yonex Tennis. Additionally, she also has an endorsement contract with Adidas. The sportswoman also has her skincare lineup named Ready24. Moreover, she is affiliated with the non-profit animal shelter organization, A Lending Paw.

What is Pegula’s Career Earnings?

Paula earned a total of over $5,079,681 from her professional tennis career.

How old is She?