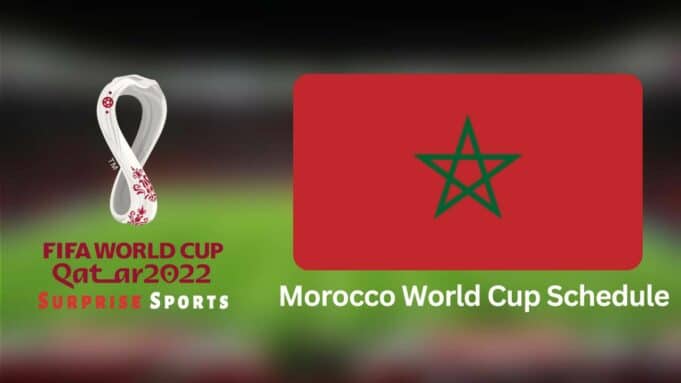 The FIFA World Cup 2022 is just around the corner, underway on 20th November in Qatar. In this episode, let’s look at the Morocco World Cup schedule for 2022.

The Atlas Lions have qualified for the FIFA World Cup for the second time. They couldn’t make it out of the Group Stage four years ago following their defeats to Iran and Portugal and a draw against Spain.

However, Hakim Ziyech, Achraf Hakimi, and co have another daunting task this year to play against the 2018 World Cup runners-up Croatia, third-place Belgium, and Canada in Group F.

Morocco will play in Group F in the FIFA World Cup 2022.

Morocco will play their World Cup opener against Croatia on 23rd November before facing Belgium and Canada.

*All times are in GMT

Morocco’s Opponent for the Round of 16

Group F teams will play Group E in the Round of 16. Hence, Morocco’s Round-of-16 opponent could be Spain, Germany, Japan, or Costa Rica.

Fans in Morocco can enjoy the FIFA World Cup 2022 live via beIN Sports. The channel will broadcast all 64 matches live, including Morocco’s matches.

ITV and BBC have the World Cup broadcasting rights in the UK. Fans can watch the live stream using BBC iPlayer and ITV Hub.

Fox Sports have the World Cup broadcasting rights in the United States. FOX will broadcast 35 matches, and FS1 will broadcast 29 matches live. The cable cutters can watch the live stream via the Fox Sports app, fuboTV, and Sling TV.